Christine Miller High (1911-2010) spent most of her life in Marin and San Francisco. She studied at Miss Burke’s School where she began her art training and then continued her high school studies at Katherine Branson School. After graduating from high school she traveled extensively in the Orient and the Dutch West Indies and upon her return to SF entered the Fashion Art School for several years of study under Maria von Ridelstein. During summer sessions she had the opportunity to study under visiting instructor and master Eliot O’Hara. Her biography is included in Edan Hughes’ book Artists in California, 1786-1940. (See below.) Ms. High was a member of the Society of Western Artists.

Her plein air watercolors explore scenes of 1940s San Francisco, and were acknowledged with the awarding of a one-woman show the de Young Museum in 1941, although it was never installed because of the outbreak of World War II. Her work was shown at the Oakland Museum.

These rare vintage paintings, courtesy of the High family, are being exhibited for the first time in decades. They are done mostly on heavy weight Veritable Papier D’Arches Torchon paper. Certain works are signed by the artist. 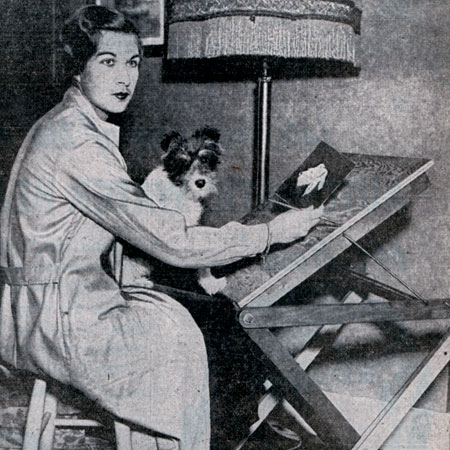 Christine Miller High (1911-2010) was a fourth-generation San Franciscan who painted San Francisco street scenes in the 1930s, 1940s and 1950s. High’s watercolors have a broad appeal that transcends their everyday subject matter— everyday for scenic San Francisco, that is; there is also, as we look back at old San Francisco, a nostalgic appeal, especially for San Franciscans familiar with the scenes, and perhaps of a certain age. (San Franciscans may be forgiven for being a little obsessed with The City for its looks: the abstract painter Mark Rothko, who lived here in 1949, said the most beautiful place in the world should be its art capital.)

The artist lived most of her long life in Marin County and San Francisco. She began her art education at Miss Burke’s School, and continued at the Fashion Art School, in the Scottish Rite Temple, also in San Francisco, with the Baroness Maria von Ridelstein (1884-1970), who strenuously advocated realism to her students: “Critics get excited by something new …. Hang an ism on it and call it a new style of painting. … It is ridiculous—going to extremes doesn’t lead anywhere. We should come down from our high horses and say art is a language…. An accomplished artist talks with his painting.” That advice seems to have resonated with High, whose work seems close in spirit to the landscape tradition of the seventeenth-century Dutch Golden Age or the Ashcan School of American painting a century ago or the Expressionist landscapes of the Depression: her paintings are shaped by reality and emotion inspired by the motif rather than pre-existent symbolism or pictorial formulas—or isms.

High’s career is outlined in Edan M. Hughes’ monumental 1985 reference work, Artists in California, 1786-1940, a twenty-year labor of love in researching some 6600 artists through newspaper and magazine articles, business records, exhibition catalogues, and telephone-book cold calls to people with the artists’ surnames. Hughes cites 1910, just before High’s birth, as the date when California women artists, formerly confined to decorative paintings, began to take their work seriously and compete with men. High, whose plein-air watercolors of local scenes were a far cry from delicate scenes of domestic tranquility, exhibited locally, joined the Society of Western Artists, and was scheduled for a 1941 one-woman show at the de Young Museum, a signal honor for an artist not quite thirty, but one which sadly never took place because of the onset of the war. But, as the saying goes, she persisted.

The works are undated, so the thematic groupings above probably have no chronological sequence. I read recently that traditional Asian artists, because of their cyclical notion of time, did not date their works in Western linear time. I suspect that for High, working in series was never a concern; that she painted what she encountered and wished to commemorate by participating in it sympathetically. The paintings may seem unsophisticated to some, with technically ‘incorrect’ (but not ‘naive’) rendering, as in the paintings of the Henri Rousseau. Their virtues, as documents of time and place, of nature seen through the artist’s temperament, endure. —DeWitt Cheng 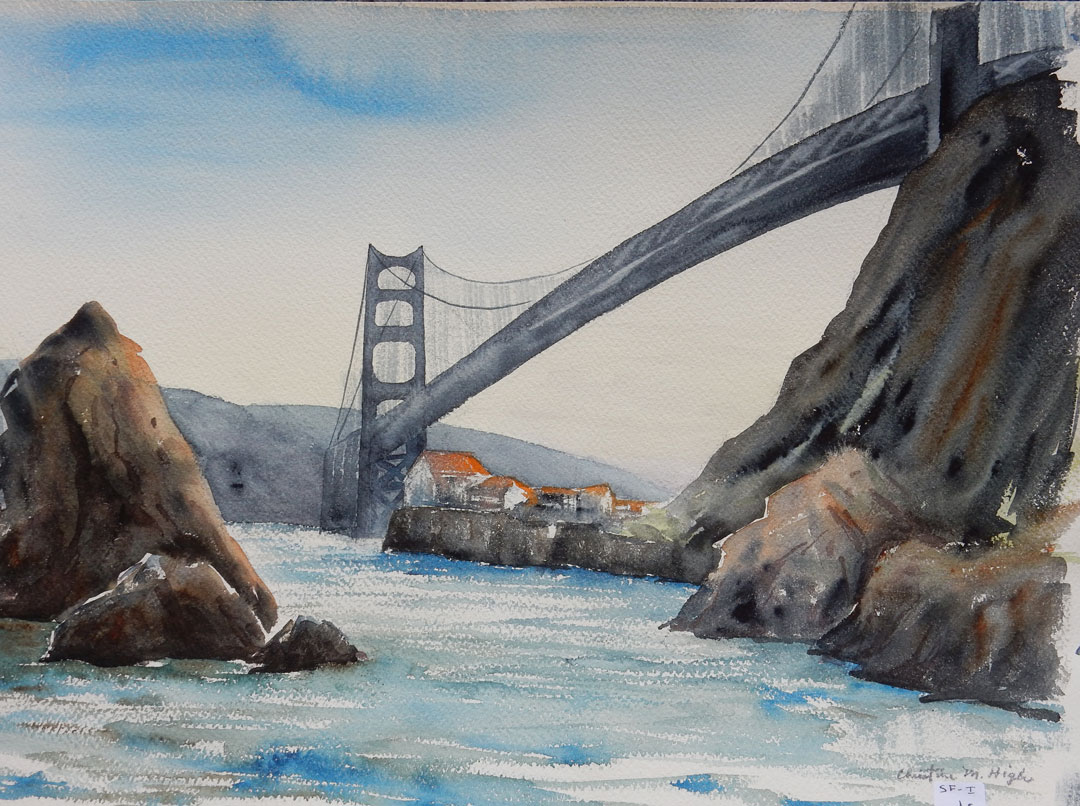 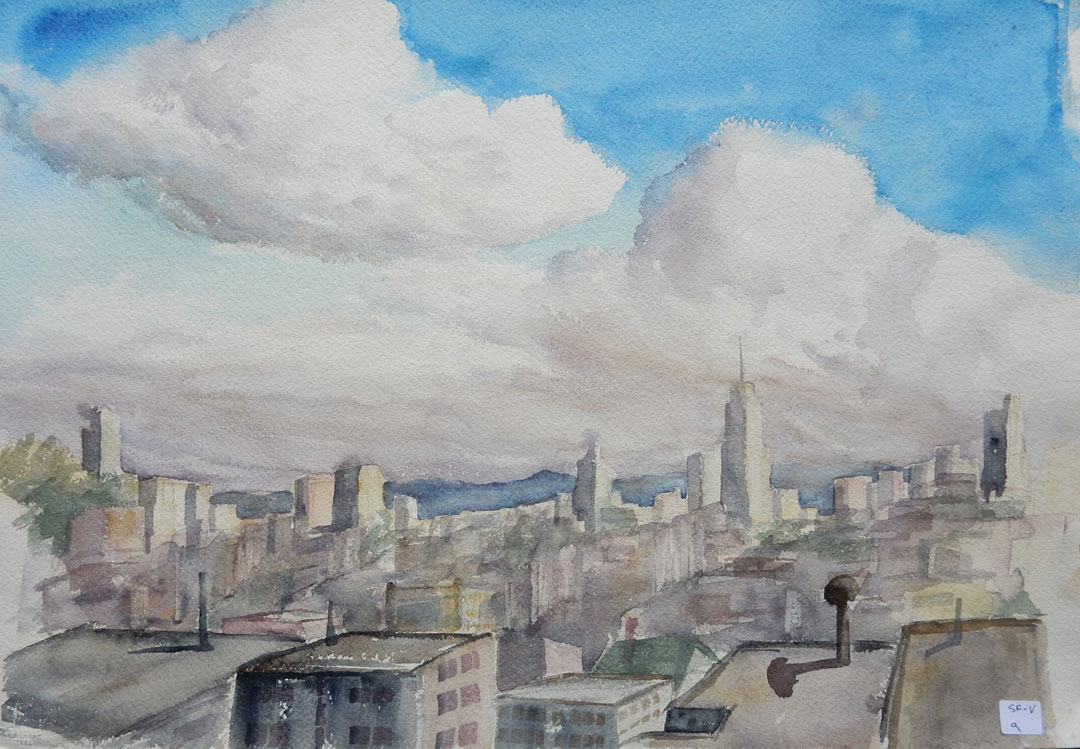 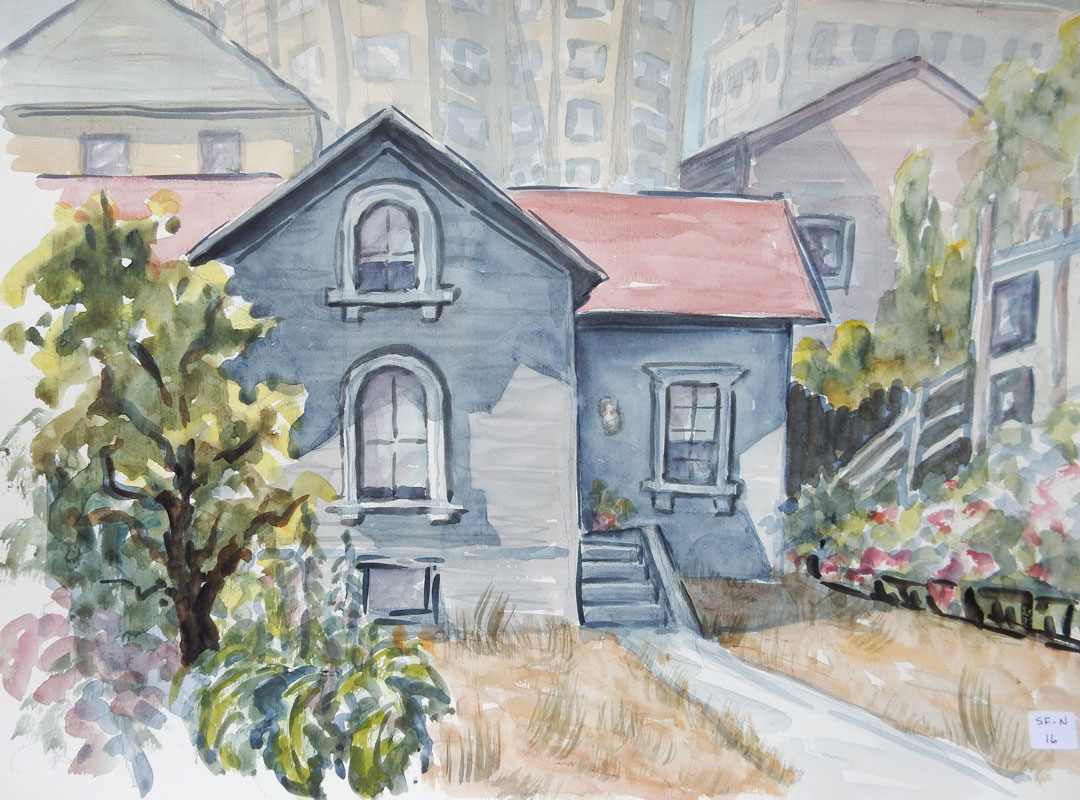 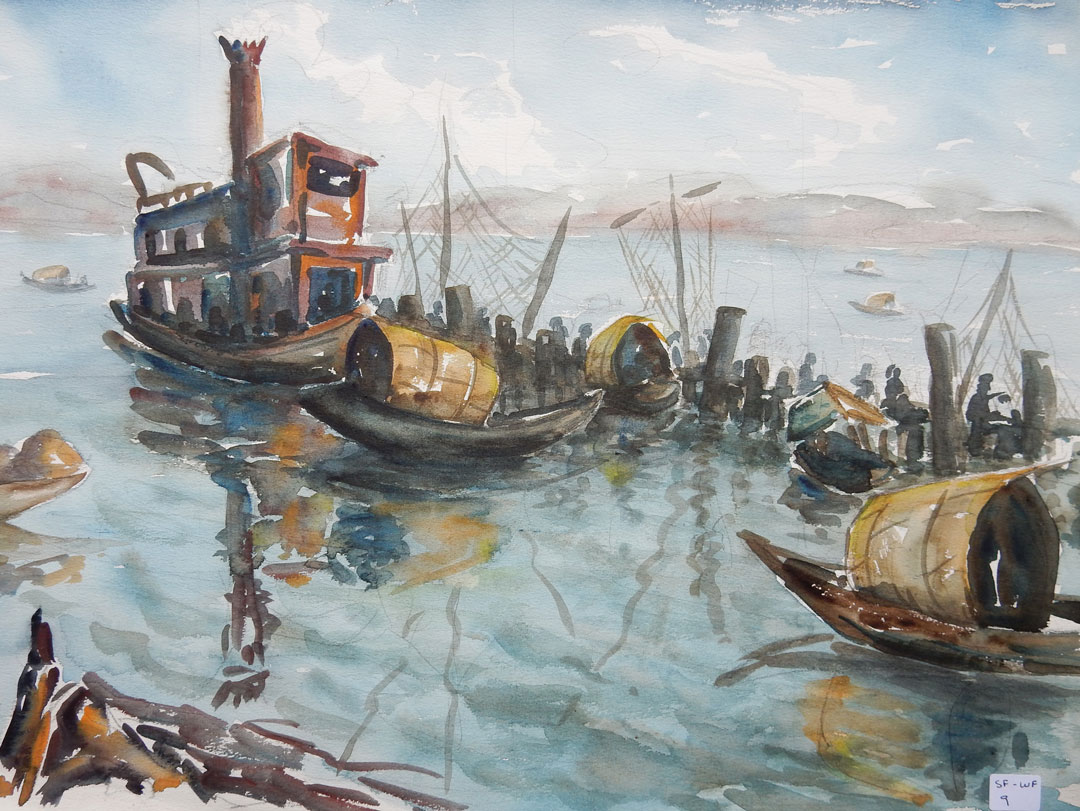 Excerpt from Artists in California, 1786-1940 by Edan Hughes

HIGH, Christine Miller (1911- ).
Watercolorist. Born in San Rafael, CA on Oct. 17, 1911. High’s early schooling included the Katherine Branson School in Marin County and Miss Burke’s School in San Francisco where she began art training. After graduating from high school she traveled extensively in the Orient and theDutch West Indies and upon her return to SF entered the Fashion Art School for several years of study under Maria von Ridelstein. During summer sessions she studied with visiting instructor Eliot O’Hara. Except for four years in the late 1930s when she and her husband were in NYC and Canada, she has been a resident of SF. Many of her landscapes and marines are of the Tahoe area where she spends much of her leisure. She is still active as an artist and a member of the Society of Western Artists. [Interview with the artist.]