Alan Mazzetti makes his cityscapes cohesive and identical in classical style. Says Mazzetti, “The urban edge is not about limitations or boundaries – like painting, its a continuing process, with new discoveries… like the constantly changing skyline. New structures are continually appearing, usually juxtaposed with buildings from previous eras. The edge of the city, both physically and visually, is always expanding and re-defining itself.” 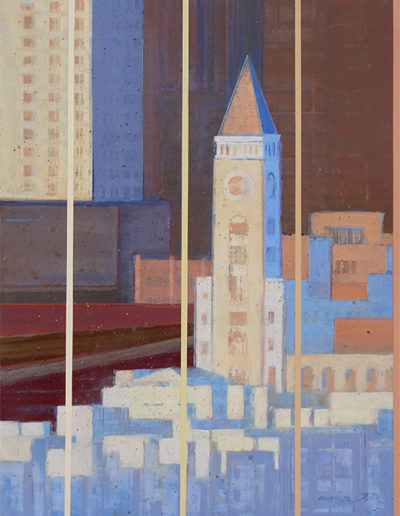 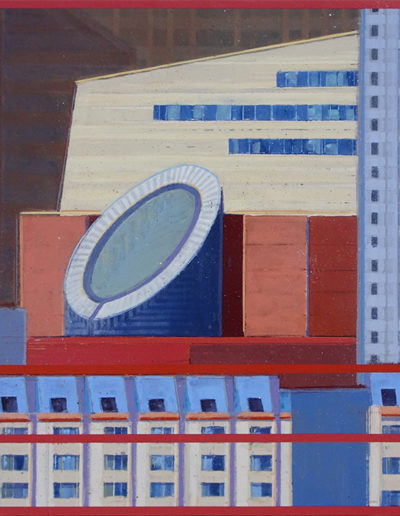 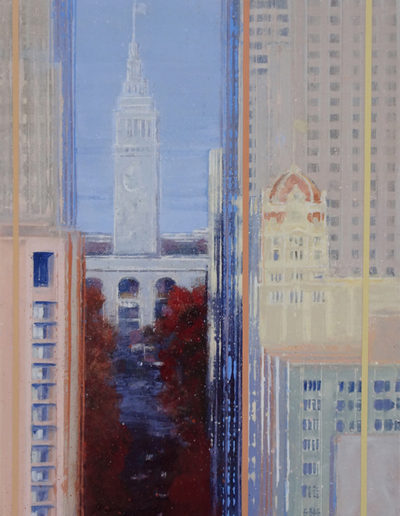 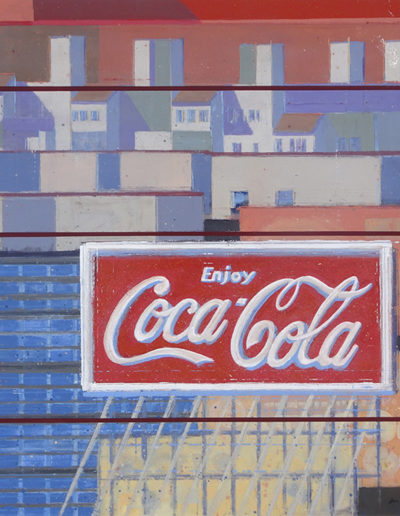 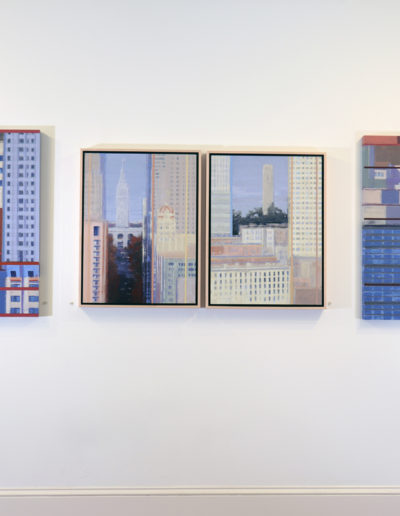 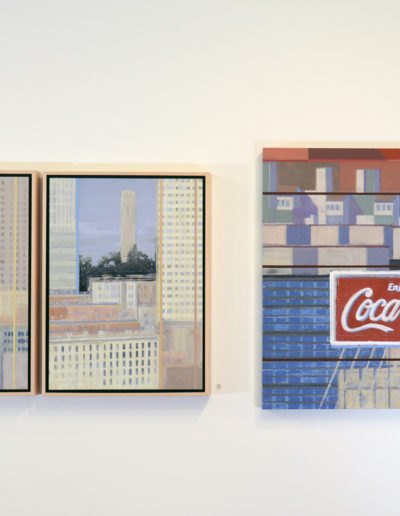 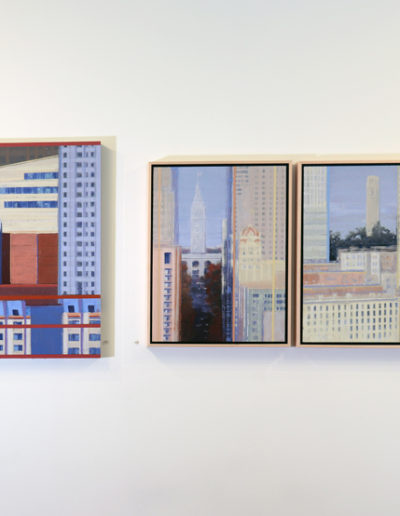 Alan Mazzetti is a contemporary artist living and working in San Francisco California, specializing in abstracted landscapes and cityscapes. As a second generation artist and Californian, he is strongly attracted to the many visual delights of the Bay Area and has developed a unique approach to depicting them in his acrylic paintings.

Re-locating to San Francisco from his native Santa Barbara, Alan studied at the Academy of Art College in the mid-70’s, concentrating on Graphic Design and Illustration. Hired at his graduation show by a local design firm, he was employed for 3 years before deciding to go freelance in 1976, and has remained an independent artist since then. “Designing logos, posters, collateral print material, packaging and book jackets, working with typography, was very rewarding and a great application of distilling visuals to their essential components. That approach certainly informs my paintings today.” Ten years of graphic design eventually evolved into the next ten years of illustration work, as he was increasingly attracted to developing a more personal pictorial style. “Design work was all about defining the client and solving communication needs. Illustration, while still visualizing someone else’s story, developed my perspective and approach to picture-making. The fine art I’ve been doing since the mid 90’s is now totally self-directed in both subject and style.”

Alan’s fine art was originally an extension of his Illustration work, using collage and photo-transfer imagery to describe his environment, primarily urban scenes from San Francisco and from his travels. Still intrigued with the idea of “essentials” this imagery was gradually edited down to basic shapes, colors and textures, leading to geometric abstractions. These paintings were exhibited and sold through galleries and consultants in San Francisco, Palm Desert, Tucson, Washington DC, Boston, and other cities. Around 2010, the abstract paintings developed “horizon lines” and while still non-representational, suggested the natural forms of landscapes. “It seemed like a sudden transition to “reality” but my approach to depicting the California countryside was – and still is – extremely simplified and minimal.”

That led to looking more closely at another aspect of his environment, the urban landscape: combining hills, trees and structures, both commercial and residential. With no shortage of subject matter in the Bay Area, or in frequent trips to southern California, Alan is now concentrating on making his landscapes and cityscapes more cohesive, more identical in style. “The thing that excites me the most now is shapes and patterns – obvious in buildings with their blocky forms and repeated windows, and also present in the vineyards and agricultural valley scenes. The landscapes become more linear, and I’m seeking subjects that emphasize that. I also use a consistent perspective – high and distant – that flattens the subject matter and gives me an interesting basis for the composition.”

It is the formal elements of painting – composition, color, texture, value, shape, mark-making – that he is most concerned with, using the subject matter as a starting point. In taking an abstract approach to the piece, he is more interested in suggesting than defining, depicting mood rather than details. The process of painting is perhaps the main subject of his work.

“The pieces I’m doing now are becoming more cohesive through a consistent approach – the point of view, the color palette, some atmospheric perspective, ways of handling paint, simplified compositions. I use a lot of masking and layering, leaving evidence of the process and the decisions involved in creating the painting. It’s really that transition that I’m trying to depict: from the initial experience of seeing the subject, through the photos, the sketches, the successive addition and subtraction of paint – all of it leading to the point where it’s out of my hands, hanging on a wall, being shared with others.”

One of the things I love about living in San Francisco is the constantly changing skyline. New structures are continually appearing, usually juxtaposed with buildings from previous eras. The edge of the city, both physically and visually, is always expanding and re-defining itself.

I like to create a sense of transition in my work, and this continuing contrast of styles is the perfect subject matter to express that. Museums get additions, office buildings and printing facilities become condos, skyscrapers rise next to churches.

This sense of change and evolution is also visible in the painting process. The initial sketches, gestural mark-making, previous decisions, masking and layering remain evident in the finished piece.

The urban edge is not about limitations or boundaries – like painting, its a continuing process, with new discoveries around every corner.

My paintings continue to explore the relationship between representation and abstraction. Subjects are selected from my Bay Area environment and serve as a starting point in the painting process.

My perspective for most of the work is from a high, distant vantage point, emphasizing the flat picture plane and patterns in each composition. The resulting images combine buildings that may be distant from each other, but appear to be adjacent, and can include a mixture of styles and eras. I think of this as an alternate reality – true from a certain point of view, and conceptually abstracted.

Enough detail is supplied to suggest the scale and character of the structures, but my main concern is the act of painting . Evidence remains of initial sketches, gestural mark-making, previous decisions, masking and layering. Further abstraction is acheived through atmospheric perspective and the degree of development in different sections of the painting.

I also like to relate a sense of transit ion in my work. The subject matter inherently implies change through the styles and ages of the structures, and sometimes a time shift through light and shadow. There is also evidence of the painting process – transitioning from blank canvas to completed image. This journey is the subject matter equal in importance to the buildings themselves – depicting movement through time and space, ultimately arriving at an unexpected destination for both myself and for the viewer.